When designing a Core Data data model for your Xcode projects, you can choose to create Objective-C object wrappers for your entities, so that you can profit from type-safe code. The normal, tedious, workflow for this is that you select each entity from the model designer, select all of its attributes and relationships, Ctrl-click it and from the contextual menu first select “Copy Obj-C 2.0 Method Declarations To Clipboard”, paste it into the appropriate class header file, then do the same thing for the method implementations in the class implementation file. Waaaaaay too much work. Not to mention the manual copy-pastes are really hard to keep in sync once you start adding functionality to these class files, since you don’t want to overwrite those additions, but you want to keep replacing everything else.

Fortunately, there is a great way for automating this process, using mogenerator. The tool can be downloaded as a DMG installer (Aral Balkan’s blog mentions a workaround for older Xcode versions, but for Xcode 3.1.3 it worked out of the box for me), or you can checkout the sources from github and build it yourself.

For example, when you design a model with two entities Foo and Bar, mogenerator can be invokes as follows:

The flag -m sets the input model file, while -M and -H specify the output directories where the machine and human classes should be generated respectively.

This does a few things:

Wrapping it up ¶

The trick of how mogenerator works is that you can run the script as often as you want. After every change in your model, you’ll want to re-run the generation again to update the machine classes. You could easily leave Xcode, switch over to Terminal and issue the command above. But you’ll get quite tired of that after a few times.

Therefore, I’ve written a custom user script that can be added to Xcode (see figure), which does the following: 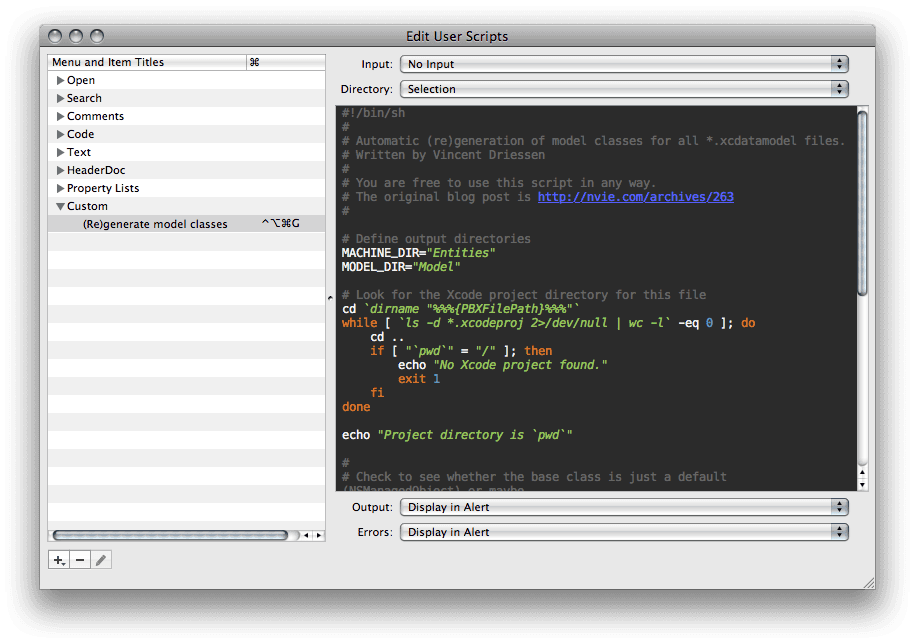 To add this script to Xcode, open the menu Scripts (the icon) > Edit User Scripts… Click the “+”-button on the bottom-left and select “New shell script”. Set the values for Input, Directory, Output and Errors as in the screenshot above, then copy-paste the script below into the code window. Add a nice keyboard shortcut to this action to top it off :-) I’ve chosen ⌥⌘G for this.

Please feel free to leave any comments if this helped you.