One of my top favorite features of the Python programming language is generators. They are so useful, yet I don't encounter them often enough when reading open source code. In this post I hope to outline their simplest use case and hope to encourage any readers to use them more often.

This post assumes you know what a container and an iterator is. I've explained these concepts in a previous blog post. In a follow-up post, I elaborate on what can be achieved with thinking in streams a bit more.

Why are iterators a good idea? Code using iterators can avoid intermediate variables, lead to shorter code, run lazily, consume less memory, run faster, are composable, and are more beautiful. In short: they are more elegant.

"The moment you've made something iterable, you've done something magic with your code. As soon as something's iterable, you can feed it to list(), set(), sorted(), min(), max(), heapify(), sum(), ‥. Many of the tools in Python consume iterators."

Recently, Clojure added transducers to the language, which is a concept pretty similar to generators in Python. (I highly recommend watching Rich Hickey's talk at Strange Loop 2014 where he introduces them.)

In the video, he talks about "pouring" one collection into another, which I think is a verb that very intuitively describes the nature of iterators in relationship to datastructures. I'm going to write about this idea in more detail in a future blog post.

Here's an example of a pattern commonly seen:

Now look at the equivalent thing as a generator:

Not much of a difference at first sight, but the benefits are pretty substantial.

The last bullet is by far the most important one. Let's dig in.

Composability is key here. Iterators are incredibly composable. In the example, a list is built explicitly. What if the caller actually needs a set? In practice, many people will either create a second, set-based version of the same function, or simply wrap the call in a set(). Surely that works, but it is a waste of resources. Imagine the large file again. First a list is built from the entire file. Then it's passed to set() to build another collection in memory. Then the original list is garbage collected.

With generators, the function just "emits" a stream of objects. The caller gets to decide into what collection those objects gets poured. 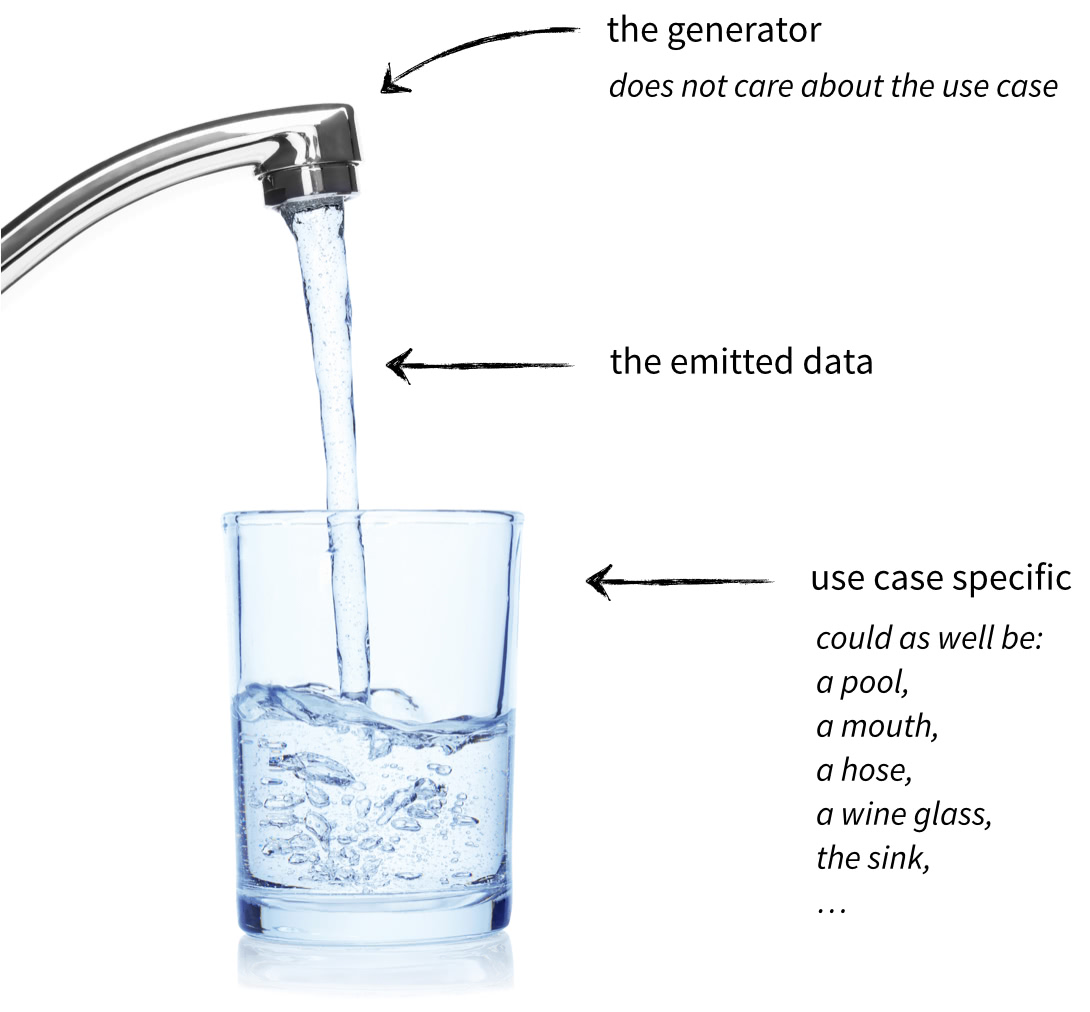 Want just the longest line from the file? The file will be read entirely, but at most two lines are kept in memory at all times:

Update: At PyCon 2013, Ned Batchelder gave a great talk that perfectly reflects what I tried to explain in this blog post. You can watch it here, I highly recommend it:

Don't collect data in a result variable. You can almost always avoid them. You gain readability, speed, a smaller memory footprint, and composability in return.